Skip to the content
Nordic Voice by Helle Thun 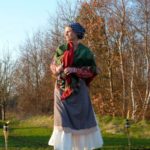 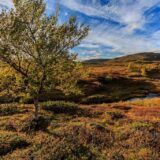 For centuries Scandinavian landscapes have been filled with an ancient music: kulning, the traditional calls used to call down sheep, goats and cows from high mountain pastures where they have been grazing during the day. The Swedish term “kulning” (pronounced “coolning”) is a contraction of the words “Kuh” (cow)  and “lock” (to call or coax). 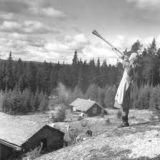 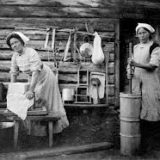 Kulning, along with the cowhorn and lur (long horn), was an important working tool of the pastoral herding traditions that existed in Scandinavia from antiquity up until the 1950s. Kulning served as a musical means of communication between herder, their animals and other herders during the summer seasons. Due to a lack of grazing areas near farms, peasants moved with the animals far into the woods where they grazed sheep and cows on the pastures and forests. It was largely the women and children who were responsible for supervising the herds, making cheese and whey and gathering the supplies that would sustain the family over the winter.

Evidence of the Scandinavian pastoral herding tradition can be found in many archaeological sources; traces of pastoral shieldings have been found in Iceland from as early as the 8th century. Kulning thus has its origins in ancient Norse culture and has been passed on in an unbroken oral tradition up to the present day, where it has been assimilated into modern folk music. 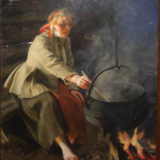 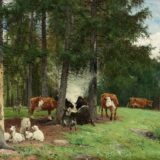 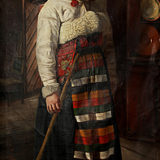 Kulning is powerful and beautiful, considered by musicologists to be the essential sound of the Nordic folk music tradition. Since the forest is the original environment of the song, this fascinating tradition has its rightful place in the natural world. For the modern person, it connects the past and present with nature and the singer’s individual power. It could be described as kind of a “forest opera” that offers opportunities for vocalists at all skill levels — from simple herding calls and traditional melodies to challenging, impressive improvisations with a unique vocal sound.

In kulning, tradition and improvisation go hand in hand — it is both an artistic style and something you have to make uniquely your own. Shepherdesses would have known the common signal calls to communicate with animals and other herders, but they also had their own personal calls and melodies with which they expressed themselves. 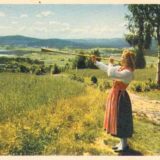 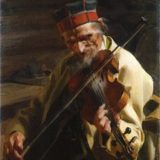 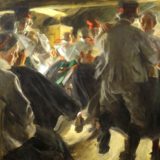 VIDEO: Leonore Tjia and Helle Thun, founders and co-leaders of the Nordic Woman expedition, share about the history of kulning and its connection to earth-based living.

SPRING IS COMING, SUMMER DRAWS NEAR. THE FORESTS IN SCANDINAVIA ARE ALIVE WITH BIRDSONG, THE BUZZING OF INSECTS AND THE WHISPERING OF THE WIND IN THE TREES.

…But long ago there were also other sounds to be heard…These sounds were just as natural a part of the summer soundscape of the woods, yet they were man-made sounds – the calls and music of the shepherds. These were sounds whose roots lay deep in history – pre-Viking Age sounds that bore messages from summer pasture to summer pasture. The pastures also rang with lovely melodies that simply expressed the shepherds´joy in playing or singing, often in response to the echoes of the very forests themselves.

It was here, deep in the woods, far from villages, that women – the shepherdesses – lived together on the summer pastures in order to fatten the livestock for the winter months. The women made butter and whey cheese in an atmosphere full of life, while the forests rang with the sound of bells. A couple of young men might pass by occasionally, but otherwise, the women lived in relative isolation, with long distances between their groups. This is why the high-pitched instruments langelur and vallhorn were used and a quite unique vocal technique, kulning, evolved. These sounds carried over immense distances and enabled the different groups of herders to come into contact with one another. It was also a way of finding an animal – or a human! – who had strayed from the flock.

But it was also wonderful to make music for its own sake in such lovely pastoral surroundings. Many of the shepherdesses had their own favorite spot in the woods, where the acoustics were particularly good. The sound was even better as the mists enveloped the woods at sunset, so the day could end with beautiful melodies and hymn tunes. Later in the evening the women would gather around the fire and sing ballads or play their spilåpipa or willow flutes.

Both the sounds and the music were uniquely special – so special that many deeply regretted the increasing silence of the forest as the traditions began to die out in the 20th century. Fortunately, folk music collectors managed to persuade some of the most practiced in the tradition to allow them to notate many of the calls, signals, and melodies from this ancient Nordic tradition, so it is now well preserved.

It is rare to have the chance to experience the rush of the wings of history, but it is possible when Helle Thun and Poul Høxbro bring these ancient forest voices to life again. Their performances, on original instruments, resound with the echoes of ancient times.!!

KULNING:
Kulning is a special vocal technique that has evolved over centuries in the Scandinavian herding culture, to enable the shepherdesses to communicate with one another and with their flocks over long distances. The word itself comes from the Swedish “kuh-lock” (calling the cows). The technique is a kind of shout in a very high vocal register and the sound is at once very powerful and very beautiful. It is not known how old the tradition is, but there is general agreement on the fact that Viking priestesses intoned their incantations in a way that may well refer to this ancient nordic vocal sound. The word invoke – “gale” – in this context means high, sharp and penetrating vocal characteristics – exactly the sound of “kulning”!

VALLHORN AND LANGLUR:
The Vallhorn is made of a horn from either a billy-goat or a cow. The tip is cut off so the sound is produced by blowing in the same way as on a trumpet. There are a certain number of fingerholes on the horn, so it is possible to play melodies. The oldest known horns of this type in Scandinavia date from the 6th and 10th centuries – the latter horn is still intact! A similar horn has been found in Denmark, though it is made of wood and probably dates from the Middle Ages. The vallhorn has a completely unique sound. It is a forest voice that produces the most beautiful and bewitching melodies.

The Langlur, unlike the more well known rounded bronze lur, is quite straight and made of wood from the bark of birch trees. It is in effect a long trumpet, but is known as a lur. The oldest of its kind was found in Denmark and is more than 1500 years old. It was found in the Oseberg grave, where a countess – or possibly a Viking priestess – was buried in a magnificent Viking ship and this lur was amongst the many artefacts buried with her.A lur was used to send signals or as a hunting horn. It has a large, commanding sound that travels far.

SELJEFLØJTE (WILLOW FLUTES) and SPILÅPIPA:
Shepherds in Denmark, Sweden and Norway made flutes – just like shepherds all over the world! lutes were used to pass the time of day while they watched over their flocks or to relax with in the evenings. One of the most original of these flutes could be heard in the spring and early summer. This was the Willow Flute. It was only possible to make these overtone flutes in the spring, when the complete bark tube could be loosened from the thin branches. The bark only lasted for a few weeks, so when it was no longer possible to make more flutes, the players had to use those they had and then wait patiently until the following spring to continue practicing! This is why this particular flute, with its own special tonality, became well known and loved as the harbinger of spring and summer.
Spilåpipa is a small flute with an intimate, intense, beautiful sound. It is especially associated with the region of Dalarna in Sweden and could very well be a direct descendant in wood of the bone flutes (the forefathers of all flutes) that could be heard in parts of Sweden and Norway right up into the 19th century.

COWBELLS and GOATS BELLS:
These were also a part of the forest sounds when flocks of animals with their collars of bells grazed on the fertile wooded ground. If an animal became separated from the others, the sound of the bells would make it easier to find, and also for the animal to find its way back to the rest of the flock. In a herd of cows, it was customary to regard one as the leader. She would be given a larger bell with a sound familiar to the rest of the herd, so they could easily follow her.

These bells have a history of more than a thousand years. A completely intact cowbell from the 10th century has been found in Scandinavia on the Swedish island of Gotland.


Warning: sizeof(): Parameter must be an array or an object that implements Countable in /var/www/nordicvoice.dk/public_html/wp-content/plugins/wp-mystat/lib/mystat.class.php on line 1252